Well, the time has come. We all know there is a snow producing system headed our way, and by this point you probably have heard all sorts of different takes on the system. Some have been talking up “snowmageddon”…others not so much. We told you a few days back the range numbers we were using for our “working theory”, and therefore, this morning, you should not be too surprised at our thoughts. But, before we get there, a quick look at today and tomorrow is warranted.

Lake effect snow developed late yesterday in extreme northern Indiana, and will continue this morning to affect those northern tier counties that we have mentioned over the past few days. Those counties are LaPorte, St. Joe, and Elkhart, Lagrange and Stueben. We are seeing a slightly farther south push to the snow into Kosciusko and Marshall Counties too, although the snow tapers off rather quickly. The snow will fade back as the day wears on, and farther south, we see just a mix of clouds and some sun. Tomorrow looks similar early, with clouds and minor bits of sun, but clouds will be building again through the day, ahead of our winter systems arrival.

Now to that snow event…snow develops overnight Saturday night, but will be pretty
minor. WE look for snow accumulations through the day Sunday and through Monday mid-afternoon. The heaviest snows will fall in the Sunday afternoon and Sunday night period. Our official snow totals forecast is as follows: from US24 northward we see 4-8 inches of snow Sunday and Monday with many areas in the higher half of the range. We won’t rule out a few 10 inch totals, but they will be isolated, created more by brief bursts of intense snow than a large scale advancing wave. Coverage will be 100%. From I-70 to US24 we see 2-5” with 100% coverage. From I-70 south to US5

0, a coating to an inch or two 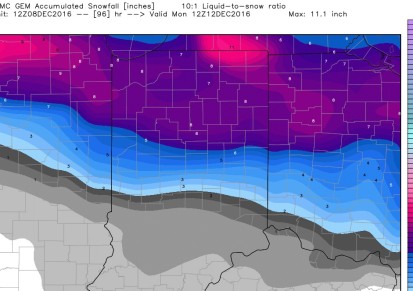 with coverage at 70%, and then south of US50, flurries or nothing in the way of snow. However, those southern areas could see some rain mix in at times, so coverage
of any type of precipitation will be between 80 and 100%. Winds will not be too bad in areas where there is snow, definitely much lower wind speeds than what we saw yesterday and today. Still, there can be some blowing in drifting to watch for. Sunday and Monday will be a mess over most of the state. The map above shows snow totals as of Monday afternoon. The 11” totals take into account some lake effect snows that still hang on this afternoon and evening, and are not a true representation of the snows from just our weekend system. However, this snow distribution mirrors our thought for this system very closely (NOTE…we made our forecast independent of any 1 model, as no model could be trusted in the lead up to this event and our forecast this morning…but this representation from the Canadian model just so happens to fit our forecast pretty close).

Following that system, we see cloudy weather, but more importantly, another arctic blast coming in from the NW. This air mass will be colder than what we have seen this week, taking temps to well below normal levels for the balance of the week. In this cold air push, we see several clipper like waves moving through, bringing additional light snows.  One of these will be in for Wednesday bringing only some light snow and flurry action with little to no accumulation. A bigger, more impressive wave hits for Thursday night through Friday, and it can bring good accumulating snows to 80% coverage in the state. For now, we will pencil in 1-4 inch potential, and keep in mind those will be our “working numbers” going forward – not an official snow forecast. We will tweak over the course of the next 5 days as things come into sharper focus. Still, look for a somewhat interesting close to the week next week. Drier for the end of next weekend, the 18th, into the following week.

In the extended period, we see potential for another frontal complex ahead of Christmas around the 22nd that brings accumulating snow potential. However there could be a warming surge ahead of the cold front, so we may not have a significant snowpack as that system comes in. time will tell. AT this point, we would put odds at about 65% that we have a white Christmas over most of Indiana, however.