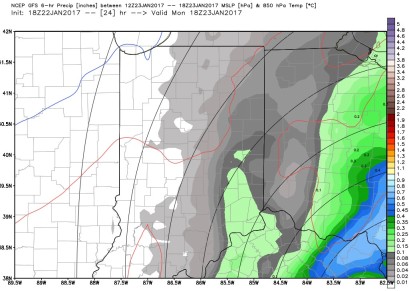 Clouds will be a bigger player in the forecast today, but generally speaking, we see no major weather problems in the short term. In fact, we continue to see most of the bigger precipitation outbreaks this week missing the state, mostly to the south and east. Today we have strong low pressure following that track. As a result, we expect good wrap around cloud cover to be in over the state through the day today, but not much precipitation. Go east into OH around midday and this afternoon and you will run into a few tenths up to half an inch, but in Indiana, we see very little. WE won’t rule out a few spits and sprinkles from midday through afternoon in east central and northeast parts of the state, but coverage will be limited to 20%-30%. The rest of the state is just cloudy. The map above is a snapshot of the region around noon today.

Tomorrow will be mostly dry. Clouds may be difficult to break up in some spots, but we will see some sun. Our next little wave rips through the great lakes for Wednesday, and this may be enough to bring some light moisture in overhead for the northern third of the state. Some of this may try and spread southward later Wednesday night into Thursday. Still, moisture totals are minor, a few hundredths to a tenth or two for Wednesday, and colder air may bring sloppy wet snowflakes overnight Wednesday night in spots. Coverage will be limited to the northern third of the state Wednesday, and the northern half of the state by Thursday midday. Action leaves very quickly, and will not amount to anything serious.

Drying out Friday through the weekend and early next week. The biggest hiccup will be clouds…as they may not be able to dissipate as quickly, with cooler air coming in. However, we truly see temps only back closer to normal over the weekend and next week, not significantly below. Models suggest winds ramping up next week around a strong circulation passing by to the north.

In the extended period, models still are far apart on the pattern. One model suggests warmer than normal air with a strong ridge in play, the other cooler, although not cold. Strong fronts will not be seen in the 11-15 day window as we see it right now.

The main key this morning is the fact that our forecast is not overly active as we go forward through the end of the month. Temps will pull back, but notice that we see far less precipitation than we picked up over the previous 2 weeks. This will allow for water levels to recede, even though we are cooling off. Moisture totals will be below normal from now through early February over the Hoosier state.