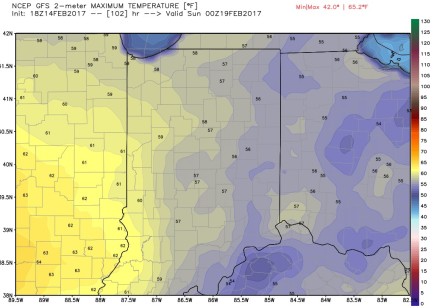 No change in the forecast this morning over the state. We continue to see sunny, dry weather, and temps will slowly expand as we finish the week and the weekend. Temps will be above normal, and this weekend should be well above normal statewide. In fact, temps this weekend will be more like what we would expect in late march or April. Our next precipitation event is not coming in until next Tuesday. The map above shows max temps for Saturday…which are nowhere near where we should be!!

Ahead of that event, we likely see clouds start to build Monday, as warm air holds over the state. Scattered showers move in with the warm front late Monday night into Tuesday morning. This first wave of moisture is likely worth a few hundredths to about .3” of light rain over 80% of the state. There will be a lull in the action from Tuesday midday through Wednesday morning, before nice, compact little low pressure circulation and cold front comes through bringing additional light rains to about 50% of the state. These rains will be from a few hundredths to a quarter of an inch. So, you can see we are reducing our overall look at moisture next week to a range of .1”-.5” over 2 days, with coverage at 80%. But, we are not removing precipitation entirely at this point. The coverage of rain will rely heavily on the first wave of moisture Monday night into Tuesday…as the second wave is fairly unimpressive.

Behind that system, we see cooler air returning over the state, but no additional precipitation. WE should be dry Thursday through Friday with temps closer to normal, but still not below normal. A strong front is likely going to try and work in shortly thereafter as we start the extended period. This front comes out of the plains and moves into the eastern corn belt from late next Friday night through Saturday, bringing potential for half to 1 inch rains and coverage of nearly all of the state. There should be a significant warm air push ahead of the low, but colder air can wrap in on the backside, and it may be cold enough to trigger a little bit of snow.

Farther out in the extended window, another front works into the state for the night of the 1st into the 2nd. This front is not nearly as impressive up in Indiana, with a quarter to half an inch of moisture at best. But, what is interesting is the track of the system over TN. If cold air can hold on in the great lakes, this may trigger a chance of snow over northern Indiana with this system and its current track. There is plenty of time to get it to lift farther north, or sink farther south, but it is interesting nonetheless. Right now we keep rains over 1.5” south of the OH river.

As an added bonus commentary this morning, we can say that a few models are starting to suggest a major cold push for about 4-6 days in early to mid-march, straddling March 10. This cold air would be coming straight across the north pole, streaming down into the nation’s midsection. In a normal year, this would not be that much of a story, as temps, while cold, will only be somewhat below normal. But, this year, with a warm January and a warm pattern developing for the second half of February…this cold push, if it is realized, will garner some good attention.