Back to mostly cold weather this week across the state. The week won’t be without a little bit of up-and-down, but generally we spend a majority of the week below normal. And, our relatively active precipitation pattern continues.

This morning, we see action leaving the state to the east. This is the remnant of the light rain and snow that invaded late yesterday afternoon and went into the overnight. Moisture totals were generally a few hundredths to about .4” liquid equivalent. We should see sunshine for several hours today as high pressure sweeps quickly through the state, ending up in north central Ohio by this afternoon. On the backside of that high, though, clouds will begin to increase again toward sunset. 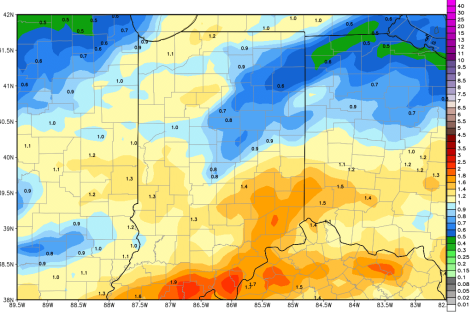 A significant frontal boundary will cross the state tomorrow. Action begins in and around midnight tonight. We will see moisture come in waves over the region from that point on through sunset tomorrow night. Total rains will be from .25”-1.5”, and coverage will be at least 90% of the state. The upper end of the range will be limited to areas that see come heavier bands or thunderstorms. Late tomorrow, one of those kinds of bands looks to set up over far northern Indiana, perhaps over the norther row or two or counties. Earlier in the day, we see a smaller batch of this type of action in central Indiana. But either way, if you are in a zone that sees the heavier action or not, everyone is going to get wet. Fueling the rain event will be south winds ahead of the front, bringing up the warmest air of the week into the circulation. Tomorrow will be the only day this week where we find ourselves above normal. The map shows cumulative precipitation through Wednesday morning.

Much colder air is on the way in for Wednesday morning. However, we think most of the moisture will be gone before it gets here. We won’t rule out a few snowflakes here and there over the northern third of the state to start off Wednesday, but in general, we are just cloudy and cold at midweek. Temps will be well below normal, and may barely break freezing in far northern areas.

Thursday should be dry statewide, and we see some sun in there. But, minor moisture moves in over the northern third of the state overnight Thursday night. This likely brings just clouds in most areas, but we will leave the door open to a few flurries and a bit of light snow from US 30 northward from sunset Thursday night to sunrise Friday morning. A fast moving little wave moves through from Friday evening into Saturday morning, and may bring a dusting of light snow to northern Indiana, and then a few hundredths of an inch to .2” liquid equivalent of a mix of rain and snow to areas south of I-70. There is not much moisture here, but it is testament to the cold air, and will give the potential for a bit of a mess as we start the weekend.

Saturday has high pressure in controls across the state, and Sunday looks mostly dry as well. Cold air to start Saturday will moderate to near normal temps for Sunday. South and southeast winds will help with that.

We start next week damp again. Another minor batch of moisture moves through, giving up to .25” of liquid equivalent precipitation. There is a chance of some of that coming as a mixt of rain and snow from US 24 northward, but generally, the rest of the region just is looking at a cold rain. This moisture should be to our east by midday Monday, and will strengthen as it leaves. Ohio could be looking at significantly higher rain totals for the start of next week. We mention that because a slight change in timing or track could bring higher rain totals back in to our region, so we are going to watch that system closely.

Tuesday and Wednesday of next week look like they want to stay dry, although a few scattered showers to the west in IL Tuesday morning may try and threaten western Indiana briefly before dissipating.

In the extended window, a strong low moves over the great lakes to finish next week on Friday. The track right now looks to keep the heaviest moisture over Michigan, but we are leaving the door open for .25”-.66” of rain across Indiana from late the 13th through the 14th, as the cold front associated with that northern low sweeps southeast. We also have a concern that the front will stall over the eastern corn belt near the I-70 corridor for the 15th and 16th, bringing an additional half to 1” of rain to the southern half of the state. More data is needed on this event, but it is entirely in the realm of possibility. Looking past the 11-16 day forecast window, we are watching another front for closer to the 18th, with additional light rain potential.

Overall, this forecast is active. We do not see overly heavy rains with any significant confidence beyond what we see for tomorrow. But, we do see enough light moisture coming with ample frequency, along with rather cold air in the short term, to say that our field work chances through the first half of April are minimal to non-existent. In fact, we likely will start the second half of April with a soil profile a little on the “too wet” side. Cool temps will hinder drying conditions as well, exacerbating the issue.