Two dramatically different forecasts this Friday morning over Indiana, depending on where you are. Over the northern third of the state, snow is falling and will fall all day. The southern extent of the snow will be roughly the US 24 corridor. South of there, we see some clouds, and south of I-70, we likely see sunshine off and on through the day. Up north, snows of 1-3 inches are likely from US 24 up to near SR 14, and then 3-8 inches from SR 14 up through SR 4. There is potential for some 10” plus snows in far northern Indiana, but we feel those are not going to be as widespread as some other forecasts have advertised. There is still a major discrepancy between models, and we are not going to take the most zealous model and run with it at this point. Many of the heaviest snow areas will see between 5 and 8 inches, from US 30 up through SR 4. The snow will continue all day in the north, finally tapering off after near evening. Again, farther south we see nothing, and many areas south of US 24 will be able to see afternoon highs today at or above freezing! That means this snow up north will be of the heavy, wet variety, which also weighs on our forecasts this morning. The map below shows snow accumulations through early tomorrow (Saturday) morning. 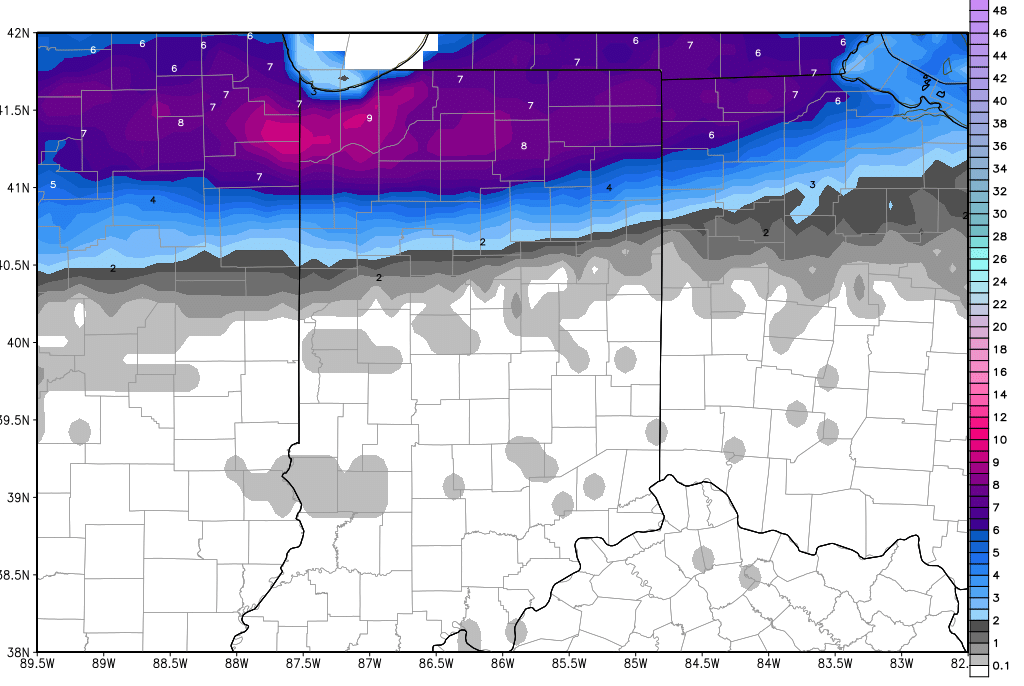 We are not done with snow after this. In fact, we have a cold front that sweeps through tomorrow and Sunday that can bring an additional 1-4” to 80% of the state. This front brings in much colder air to the south, and should leave snow accumulations all the way down to the Ohio River. The biggest snow totals will run from central IN up through northeast IN.

Bitter cold air is still on the way behind that frontal complex. We expect to wake up to subzero temps over almost all of the northern half of the state Monday morning. South of I-70, temps will also be chilly, but should remain in the single digits to low teens. Sunshine will dominate as we move through Monday. After the cold start to the week, we have temps moderate a bit Tuesday, before clouds and colder air returns for Wednesday. High pressure dominates next Thursday and temps climb again on Friday. We do have some scattered light snow showers possible overnight Friday night into early Saturday, mostly over the northeast quarter of the state. On Saturday, we turn colder and drier again. After the very active pattern of this past week to 10 days, next week will seem downright boring.

We see no change to the extended pattern, and expect it to turn more active again. Right now we are eyeing 3 systems in 5 days. One on the 18th brings rain mixed with snow, and liquid equivalent precipitation of a quarter to half inch. On the 20th we see half to 1 inch of moisture coming through (liquid equivalent) and on the 21st we can see 1-2 inches of liquid, potentially coming as mostly snow. We should end the 11-16 day period with dry and cold weather through the 24th.